Dogs are not our whole life, but they make our lives whole. ~Roger Caras 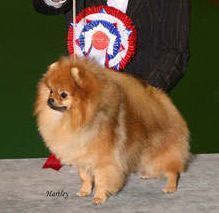 Apple was shown and in partnership as a puppy and Junior by daughter Hannah Orchard  then took 'leave' from the show ring for maternal duties she is returning for the showring for 2009 , after her show career she will then retire with Hannah abroad and be an expat pom in the future.

Apple acheived so much as a puppy and Junior in a short amount of time with many show wins under her belt we are very proud of this cheeky girl she has so much character as well as being a super pomeranian.

Apple still continues to do fantastic in the Show ring some of her earlier wins AT Championship shows recorded as below ...